END_OF_DOCUMENT_TOKEN_TO_BE_REPLACED

Another Mauritian Tale about Police Brutality… But shouldn’t we go beyond ?

On the 2nd of March this year, the news came out as a traumatising shockwave to entire Mauritius!

Iqbal Toofanny, 42 yr-old father of three, was declared deceased by the coroner, 48 hrs after his arrest and stay in custody. Publicized photographic evidence showed multiple contusion and bruises, on several parts of Toofanny’s body. These made no doubt about how the 42 year old citizen, was mistreated, brutalized and beaten up while in Police Custody.

Five suspects, all CID (Central Investigation Department) officers, were indicted on charges of torture and later bailed out on a Rs 9 000 (300 USD) bond, after 24 hrs detention. This, by itself, has been lived through as mere injustice, by an entire empathic population. The entire Police Force and Mauritian judiciary became (again) suspects of unequal justice delivery, towards simple citizen. How can five Police officers come out with a Rs 9000 bail, when there are strong unrebuttable presumption of torture and manslaughter? The Scene was set!

To the eyes of many, this kind of situation could have triggered social chaos. Should this had happened under the previous detested Ramgoolam government, there would have definitely been profound social unrest and riots, like in 1999 when iconic creole singer Kaya died in Police Custody. END_OF_DOCUMENT_TOKEN_TO_BE_REPLACED 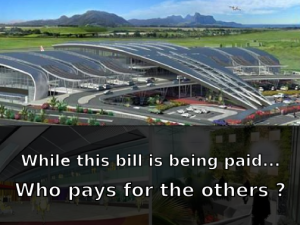 The Governement of Mauritius was proud on the 30th of August to inaugurate it’s latest billion-dollar gem. A State of the Art airport designed to respond to the challenge of a slugishly growing traffic.
Proud too, were the People of Mauritius. It was like entering a new era of technological excellence. I was… really ! But as of today, after the momentous euphoria, when I project the weight of such an effort against the country’s most urgent social needs, I have big doubts. While our target tourist markets are struggling to move out of a rampant and persistent recession, we are in phase of Pharaonic adventure. This is dubious development !

The Great Pyramid of Giza did not make Egyptians happier! It gathered centuries of pride and fame. In the end, in 2013 A.D, 5000 yrs even after, they are still carrying the payload of the 2,3 million stone blocks!
END_OF_DOCUMENT_TOKEN_TO_BE_REPLACED